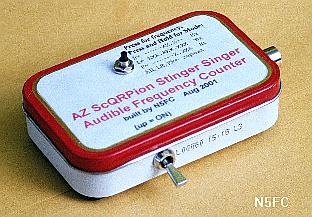 I was excited when the Arizona ScQRPion QRP Club decided to release a PIC-based frequency counter kit called the "Stinger Singer". At a mere $20, it represents one of the best test equipment bargains for the radio amateur.

The Stinger Singer measures HF frequencys (to 30+ MHz), and annunciates the frequency audibly, using morse code. Originally, the kit offered two speeds, the lowest of which was 18 wpm. Now, a second version is offered at speeds of 10/15 wom, siutable for the ham with novice CW skills.

The kit was intended to assemble in an Altoids box, and that's exactly what we did. We scrapped the RCA connector provided, and used a BNC instead. Also, we added a power switch so we don't run down our little 9V battery. Here's a picture of our assembly, viewed with the cover open: 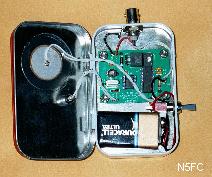 (click on the picture to see a larger version)

What a nifty counter this is! Keep in mind this counter is intended as a test instrument, not as a virtual display (like the Freq-Mite). As such, it won't allow a programmed offset from the actual frequency. But as a straight-ahead freq counter, it's superb! It did as well as my commercial counter, in about one-twentieth the space. It has several "display" options. One I found quite useful was mode "F". In this mode, using my Crystal Checker, I was able to grade fifty 16 MHz crystals in about half-an-hour. Neat!

I heartily recommend this kit, even for beginners!